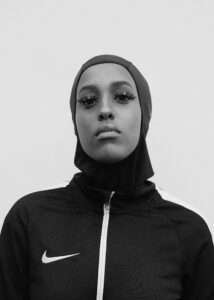 Iqra Ismail is the director of Women’s Football at Hilltop Women’s Football Club (previously known as NUR Women’s Football Club) which is a sports organisation aimed at engaging women and girls in football. The club has been running for almost 3 years now and Iqra strives to create a safe, comfortable space for women and girls to play football. She is the youngest Football Black List Winner of 2019, having won the coveted award at just 19 years old. She has worked with Nike, Chelsea FC and Pepsi and been featured in Vogue three times, the Telegraph, FIFA.com, BBC, and Al Jazeera. She is the first ever and current Captain of the Somali Women’s National Football Team, getting her first international cap in December 2019.